Somsri’s Herbal Drink recipe is a blend of citrus plus herbal drink since King Rama V.

Kaffir lime is known as an antioxidant and has many health benefits.

The increasing heath consciousness of the global consumer has created an opportunity for Thai herbal products. In the belief that prevention is better than cure, Somsri’s Herbal Drink has been adopted from a recipe dating back to the time of King Rama V. The innovative herbal drink can help prevent illness, something that has become even more important during the global Covid-19 pandemic.

Methika Thanaviroj, Marketing Director of Somsri’s Herbal, says that the traditional herbal recipe was inherited from her great grandmother, who worked in the medicine room of the royal palace during the reign of King Rama V. Somsri’s Herbal Drink is a citrus plus herbal drink that has been developed by Methika’s family and AVS Innovation Institute. 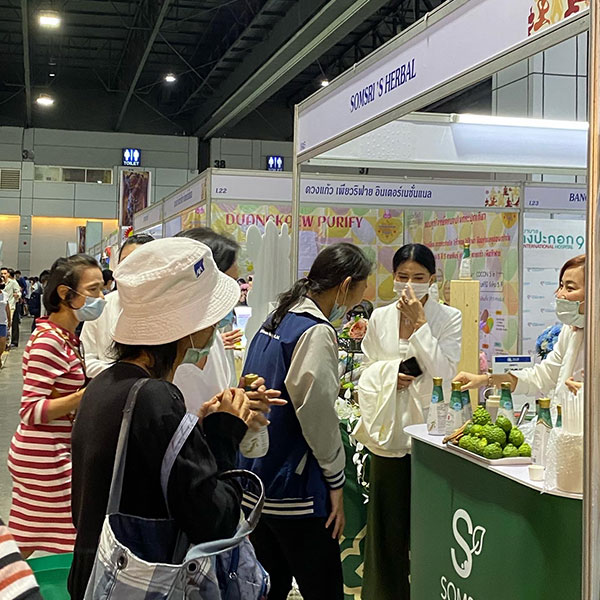 “Somsri is both my great-grandmother and my grandmother’s name, as well as a familiar Thai woman’s name, so we chose this to be easily recognised,” Thanaviroj explains. “Previously, my family has only sold the kaffir herbal drink since 1975. After experimentation, we invented the citrus plus herbal drink, which has kaffir lime juice and kaffir oil, which are similar to our original product, as the main ingredients.”

Methika, 28, adds that she has never realised the health benefit of her family herbal recipe until she learned from her friends abroad that Thai herbs were renowned both for their high nutritional levels and health benefits. After graduating with a master’s degree from the UK, she decided to help her mother modernise the family’s traditional herbal drink to serve new generations and wider markets.

“The kaffir lime has many health benefits,” she says. “We have combined it with other Thai herbs such as jewel vine, finger root and ginger.”

The company has received support from the DITP under the Tonkla to Goal project that helps promote SMEs penetrate international markets. The citrus plus herbal drink was first introduced to the international market in September last year amid the Covid-19 outbreak through a trade fair at the National Herb Expo.

Since its product launch, Somsri’s Herbal – Citrus Plus Herbal Drink has received a good response from customers especially among Thai woman with health concerns, as the kaffir lime is a high antioxidant known to detoxify the blood.

“Despite the Covid-19 pandemic, our sales increased by 100 percent each month in the first three months,” she says.

Somsri’s Herbal Drink has also been sold in Laos via online marketing and cross-border exports. The company plans to export to Vietnam and China next year, and launch new products, such as shampoo, conditioner and hair tonic, as well as new packaging that is easier to carry and ship, later this year.

According to Thanaviroj, the company is not only concerned about profit, but also wants to benefit the whole community. The company purchases its kaffir limes from farmers in Kanchanaburi province in western Thailand at a fair price, while encouraging its farmers to grow organic kaffir limes, which are in high demand and accepted on international markets.